When you add a new post (for example, a News Post) you may want to disable the Featured Image from appearing at the top of the post automatically. This is the standard setting in some themes.

An example of when you'd do this is when the Featured Image is just a generic image to go with the story (so it shows up on the various widgets and as the default social media share image), but wouldn't make sense to put with the story itself.

On the Featured Image area, you will see a checkbox to "Hide image on single post page" which will appear AFTER you've added one and saved the post as a draft the first time.  See example below. 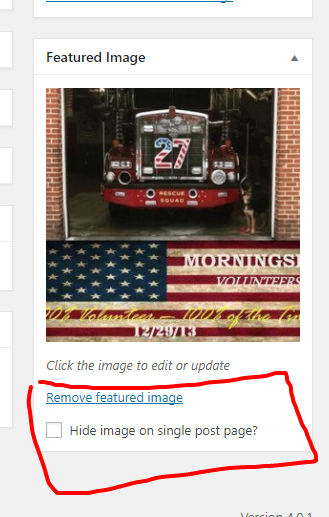 If for some reason you don't see this option, please open a support ticket.

D
Dave is the author of this solution article.

Did you find it helpful? Yes No

Send feedback
Sorry we couldn't be helpful. Help us improve this article with your feedback.